Arthur Jensen (1923-2012) was one of the most prolific psychologists of the twentieth-century. He’s so famous that there is a word named after him: “jensenism.” Jensen is remembered for arguing that black people are stupider than white people and there wasn’t much you could do about it. What distinguished Jensen from your racist uncle was that Jensen dressed up his argument in statistics and published it in psychological journals. Another thing that might distinguish Jensen from your racist uncle (unless your racist uncle is much worse than he’s ever let on at Thanksgiving) is that Jensen palled around with neo-Nazis and admirers of Nazi racial thought. People who’s views were basically recapitulations of Nazi race theorist Hans F.K. Günther.  The recent awful Quillette article cites Jensen as a reliable source as do many other “race realist” writers nonetheless.

These connections between Jensen and hardcore white supremacists have been well known for decades (Tucker 1994, Tucker 2002, Jackson 2005). He probably would not have had the career he did without funding from the Pioneer Fund a funding agency started by a man who wanted to “ship all blacks back to Africa” and underwrote a lot of efforts to maintain segregation during the civil rights era. Jensen’s defenders argue that these connections are completely irrelevant to our evaluation of Jensen as a scientist since the objectivity of scientific inquiry would insulate Jensen’s findings from any nasty politics of his associates or funders. This is not true and I hope to show why here.

There have been books and books written about race and IQ, Jensen’s specialty and Jensen figures prominently in them all and it is hard to say anything that hasn’t been said before. But I’ll try by starting with this: 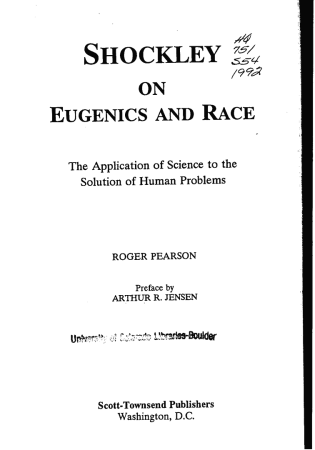 Three names appear on this title page: Jensen you know, Shockley is William Shockley, Nobel Laureate in physics for his role in the invention of the transistor (kids ask your parents). Shockley was a friend of Jensen and, like Jensen, argued that black folks were just stupid and we should probably take steps to keep the stupid from taking over. Like Jensen he dressed his argument in sciency garb so people would take it seriously. Not that a whole lot people did, but Jensen’s fawning preface didn’t let on about that.

That leaves the third name: Roger Pearson, who collected, edited, and published the essays. Here was the headline in Willis Carto’s newspaper, Right when Pearson visited United States from the U.K. in the 1950s: 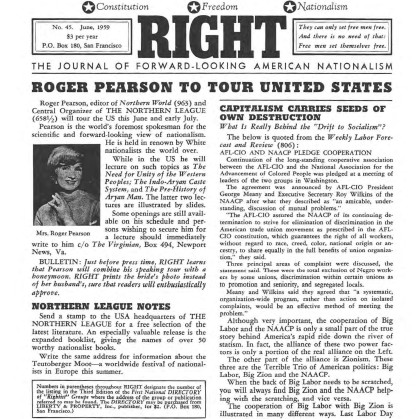 Carto was the leading antisemtic organizer in the post-World War II United States. Pearson was one of his closest confidants for decades. They edited the magazine Western Destiny together, for example. Here’s how William Tucker described Pearson:

Perhaps the most important postwar exponent of the racial science that had characterized the Third Reich, Pearson is of additional interest as Pioneer’s most enduring recipient, enjoying regular support from 1973 until the end of the century, and the grantee who provided substantive continuity with Pioneer Fund’s founder Draper’s) earlier interests,maintaining the linkage of support for both domestic apartheid and Nazi notions of racial hygiene. (Tucker, 2002, p. 159)

“So what?” Jensen’s defenders will argue, “Guilt by association! Science is apolitical! Peer review! Ad Hominem!”  In other words we should ignore that Jensen lent his name to a neo-Nazi pushing racist views. That seems misguided to me, but that is the standard defense of Jensen. However, there is evidence that those sketchy neo-Nazi types actually influenced the content of Jensen’s publications. In fact, a key argument of his most important publication rests on a fundamental mistake provided to him by a white supremacist.

Jensen made his bones, as it were, with an article in the Harvard Educational Review entitled “How Much Can We Boost IQ and Scholastic Achievement?” Spoiler alert: he thinks “not much” because black kids are just born dumb and we might as well give up on trying. What distinguished Jensen’s article from what came before was his statistical skill and the fact that he dressed up his argument in terminology of “heritability.” There is a large literature on this tricky technical subject and how Jensen and those who followed him got the notion wrong (see, here, here, here, here, here, or here for just the tip of the heritability-misuse iceberg). I don’t want to rehash that here. I have a different target.

Several times in this space I warned of equivocating between a “genetic population” and “race.” The trick of simply substituting “population” for “race” leads readers to think that our conventionally defined races are genetic populations which they definitely are not, but allows the writer to sound scientific and up-to-date.  Jensen gained enormous credibility by using the language of population genetics.   But all he did was steal that language without properly using the concepts. Jensen actually studied conventionally defined (and socially constructed) “races” unless his subjects actually took some kind of genetic test to make sure they were of the same breeding population with their fellow test-takers. Jensen claimed to study genetic populations because he wanted sound scientific. He simply claimed that we can tell just by looking at someone what “population group” they belonged to. Here’s the key passage:

This is practically axiomatic, according to the geneticists with whom I have spoken…. Races are more technically viewed by geneticists as populations having different distributions of gene frequencies. These genetic differences are manifested in virtually every anatomical, physiological, and biochemical comparison one can make between representative samples of identifiable racial groups (Kuttner, 1967). (p. 80)

Jensen simply moves from a socially defined “race” like “black” to the claim that they are the same as a genetic population. He knows this because of “geneticists with whom I have spoken.” Which geneticists? He provides us with a citation with to (Kuttner, 1967). Aha! Regular readers know Robert Kuttner! He’s this guy:

Yes, Robert Kuttner was that rarest of creatures, a racist who declares himself a racist. And the guy Jensen claims to have spoken with to really nail down this whole “genetic population” question. He probably spoke with Kuttner because Kuttner was on Shockley’s research staff.

The 1967 book cited is this one wherein Kuttner gathered together like-minded folks to trot out 19th century scientific racism in 20th century language. He then had it published with Pioneer Fund money in a vanity press created only to publish this particular book. Sherwood Washburn, the anthropologist who took modern genetics seriously and actually did create a “New Physical Anthropology” incorporating genetics into his discipline wrote about Kuttner’s book:

I refuse to accept statements of this kind as contributions to the study of race, or as being a part of modern science. This will be a useful source book for racists. Anthropologists need not bother with it.

Of course there are races, populations that differ in gene frequencies and in the frequency of genetically determined traits. The study of biochemistry and human heredity is important. But these ends will not be furthered by papers that revive antiquated typology and the racist thinking of many years ago. This collection of papers is predominantly not “Modern Science” but a collection of antiquated notions presented by old men. Would you want your daughter to marry a racist?

Kuttner’s book was, indeed a “useful source book for racists.” It was the key to Jensen’s 1969 piece that relaunched the race/IQ debate for the next few decades. When so-called “race realists” cry about “guilt by association” arguments just remember that these associations can have real consequences for the actual content of science. If you are going to give neo-Nazis respect as Jensen did, don’t expect the rest of us to just ignore that.

11 thoughts on “Arthur Jensen and His Nazi Friends”