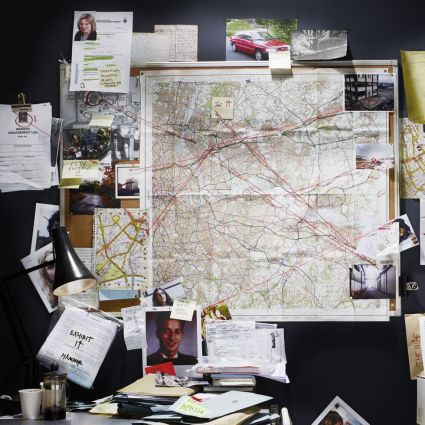 It is a TV/Movie cliché: the wall covered with pictures, maps, documents all connected with string or yarn, usually red (so it shows up on camera I suppose) to signal that something big is going on. TV Tropes call the cliché “String Theory.”  There are usually two situations where we see such walls depicted. The first is the detective drama: it is posted on a whiteboard in the middle of the squad room so our characters can stand around it do some plot exposition. Another detective drama trope is when our hero has been taken off the case by the captain because he’s gone rogue one too many times. Our detective goes home and, to the surprise of no one, there is a wall covered with all the clues connected with the obligatory red yarn.

The other situation is more ominous. The wall is being constructed by the bad guy. Maybe a serial killer, maybe someone who has lost control of their faculties. String theory has now been transformed into a “Crazy Wall”  Crazy walls are usually signs of conspiratorial thinking. Someone who is convinced that some evil person or group is control of the whole situation and must be unmasked. Someone who thinks the world is controlled by Colonel Sanders and his friends. The Crazy Wall signals to the audience that there is an unbalanced mind at work: 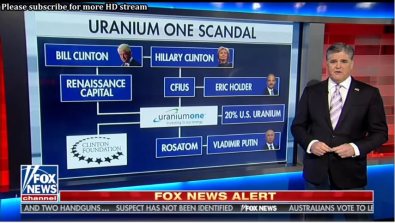 The trick for the audience is to try to figure out if the character is onto something or has gone off the deep end.

The Crazy Wall has always annoyed me as a lazy bit of writing. Maybe it is because I’m not a very visual thinker, but I’ve never understood how the wall was supposed to help the character figure things out. Maybe it is because I’m not very crafty and I could never figure out how that yarn always looked so tidy. And you can forget about your damage deposit what with all those thumbtack holes in the wall.

So I never saw the use of such a wall.  Naturally, now I’m working on a Crazy Wall of the Alt Right.

END_OF_DOCUMENT_TOKEN_TO_BE_REPLACED

All roads lead to Rome. They do because the ancient Romans built roads. Lotsa roads. They were famous for it. They had had an empire to build and maintain.  They had to come and see and conquer. They had nouns to decline and verbs to conjugate. So they built roads. Really good roads. So good, in fact, that many routes we still use today through Europe were laid down by the Romans two-thousand years ago.

The Romans built roads because they needed them for the maintenance of their empire. The technology of the road was embedded in a particular social system of power. Roman roads are an example of how, in political theorist Langdon Winner’s phrase, artifacts have politics.  The artifacts we are surrounded with every day: our houses, neighborhoods, roads, cities are political in nature. They reflect a certain set of assumptions about who should live where and who should travel freely. One of Winner’s examples were the overpasses built on Long Island. These bridges were too low to allow buses to pass which meant that major transportation routs were designed to keep lower-people out of areas while allowing wealthier, car-owning folks easy access.

In Richard Rothstein’s new book, The Color of Law, it is clear that Winner’s was not an isolated example. Throughout the country, technologies of space and place were purposefully designed to maintain a racist society.

END_OF_DOCUMENT_TOKEN_TO_BE_REPLACED

The power of racism lies in its ability to “naturalize” social relationships. What I mean by this is that racism claims that whatever social inequities exist they are part of the natural order of things. Those people are simply inferior, there is not much anyone can do about it; it is in the nature of things. Speak out for racial equality? You might as well speak out against the tide coming in, nature doesn’t care what you say. Pass laws to encourage racial equality? You might as well pass laws demanding the moon fall out of the sky. Racial inequality is in our genes, nothing society can do to will change that so we should just stop trying. Over at the National Review Online (NRO), Michael Barone has written a piece on the terrible David Reich editorial about genetics and race that does exactly this.

Last time I wrote about Reich I explained how those who really, truly believe that black people are genetically inferior to white people really, truly loved Reich’s piece.  At the NRO, and keeping the organizations long-standing  commitment to social inequality, Barone wants you to know that in this race we call life, there are winners and losers and it is just nature’s way that there are more white winners than black ones.

He makes his case by lying. I’ll explain how.

END_OF_DOCUMENT_TOKEN_TO_BE_REPLACED 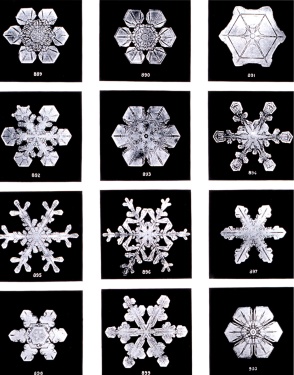 Snow Crystals by W. A. Bentley

You folks remember Tucker Carlson, right? He’s the guy at Fox News who took over for sexual harasser Bill O’Reilly when Bill O. was fired.  Ever since he took over he’s become very popular among white nationalists who appreciate Tucker pushing their agenda for them. As a writer over at American Renaissance declared: “Suddenly people on national television are talking about the end of white America, the rising tide of color, and what demographic change really means.” Long time readers will recognize the “rising tide of color” shout out.  The 1920s never really went away for American Renaissance writers.

Are you a believer that whites are victims of a planned genocide who also argues that Hillary Clinton is operating a pedophile ring out of a pizza restaurant? Tucker has your back! Are you a European white nationalist worried about all the foreigners entering your country? Tucker feels your pain! (The good racists over at American Renaissance thought Tucker did a great job of  consolidating “Years of awareness and fact, boiled down into one compound sentence— and not from an AmRen-ner or alt-Righter, either.”).  So, yeah, Tucker is the confused face of white supremacy.

Just recently Tucker explained that  white people are precious little snowflakes who must be protected from the big bad world because they are so fragile and delicate. “Reporting” on a National Geographic article on an influx of Latinx immigrants into Hazleton PA, Tucker explained if too many brown people with Spanish accents move in then it is perfectly understandable if white people just cannot even:

It doesn’t matter how nice these immigrants are. They probably are nice; most immigrants are nice. That’s not the point. This is more change than human beings are designed to digest. This pace of change makes societies volatile, really volatile, just as ours has become volatile.

We can learn a couple lessons about racism from Tucker’s latest confused rant.