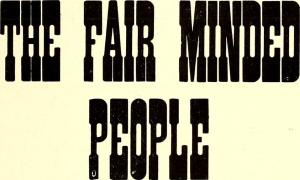 This is the fifth in a series of posts about Stephen Hsu. See the background here:

It has been seven days since my post on Stephen Hsu hosting a Holocaust denier on his podcast. He has not responded in any way and certainly not apologized. It has been five days since he has threatened a lawsuit against his critics, including graduate students at his own university. He has not explained or apologized for that threat.
Some people have suggested that I am engaging in unfair “guilt by association” tactics regarding Hsu. Consider this thoughtful exchange I had on Twitter, the home of reasonable argument: 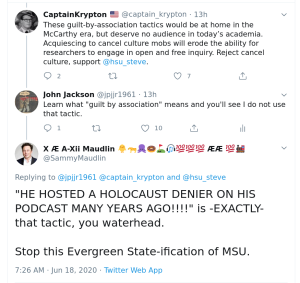 Because more serious and fair-minded people might think I am employing a guilt-by-association argument I will make clear how I am not. The heart of all my arguments in this controversy is that Hsu has shown himself incapable of making scholarly judgments about academic research, the central mission of his office. When these serious errors of judgment are made public he neither explains them or apologizes for them, instead he threatens legal action against his critics including the most vulnerable members of his academic community. These actions have shown him unfit for the office he holds and he should be removed from that office immediately.

None of the above paragraph is a guilt-by-association argument.

Guilt by association (GBA) arguments are a type of ad hominem argument, a topic I’ve published on before. Despite what you may have read on Twitter or Reddit, an ad hominem (AH) argument not simply name-calling. Telling someone “You are ugly!” is not an AH argument. An AH argument attacks a person’s argument through the character of the person advancing that argument: “You are ugly therefore I reject what you say” is an AH argument and a pretty lousy one too.

The great informal logician, Douglas Walton, wrote what may well be the definitive book on the subject of AH arguments including GBA arguments. Walton gives us an elaborate taxonomy of AH arguments and sophisticated methods to evaluate them. Here’s how he schematized the GBA argument:

The GBA argument requires that I reject someone’s claim because of their association with an objectionable group. I have never done this. I have rejected many claims Hsu has made for very good reasons based on a lot of evidence. No one has attempted to engage in what I’ve written, preferring to claim I’m offering a GBA argument when I am not. Let’s review some of the points I’ve made regarding Hsu:

There’s more but you get the idea. I have never merely argued that Hsu needs to go because of his associations. I have argued that his defenses of those associations are based on falsehoods. And I believe that those falsehoods have shown him to be incapable of representing research integrity at Michigan State University. I have also argued that his views about genetics and the reality of race misunderstand genetics and the social construction of race. This is further evidence that he should not be in a position to judge good scholarship from bad, which is an important part of his job. Finally, I have questioned his ability to recognize scientific racism when it is presented to him.

2 thoughts on “Stephen Hsu and Guilt by Association”