Just in case there was any doubt in your mind, we now have an official declaration that the Muslim ban is aimed at Muslims. The loud and repeated howling from Candidate and now President Trump gives us all the evidence we need to conclude that the Muslim ban is aimed squarely at Muslims. Or, as the Court concluded in Trump’s most recent defeat: “The record before this Court is unique. It includes significant and unrebutted evidence of religious animus driving the promulgation of the Executive Order and its related predecessor.” Most 70-year olds know that words carry consequences, but apparently Trump has yet to learn that lesson.

The vetting process for refugees is long, complicated, and thorough. This might explain why there have been no fatal terrorist attacks from the countries targeted by the Muslim ban. But! One thing we hear from the Alt-Right is that we need to ban Muslim refugees because the governments of those countries have collapsed and therefore we cannot discern who is dangerous and who is not. Breitbart “News” among others often circulates this claim (do I need to tell you that this claim isn’t really true?). Therefore, the vetting process is not only useless, it is all but impossible. We heard the same thing from the American right sixty years ago.

In 1952, Congress passed the McCarran-Walter Act, which continued the basic racist quota system of the 1924 Immigration Restriction Act, while offering some symbolic changes to immigration from Asia. It also waived the quota system for immigrants with “special skills” and added provisions to exclude or deport people engaged in subversive activities. This last bit was mostly about suspected Communists who were, as we all knew, dedicated to the violent overthrow of the United States government.

In the fall of 1956, a student-sparked revolution briefly proclaimed Hungary’s independence from the Soviet Union. For a short time, it appeared that the Revolution might succeed before the USSR brutally clamped down and reasserted its dominance, killing thousands of Hungarians in the process and causing 200,000 to flee Hungary completely and seek safety in the West. The question then, as it is now, is how should the United States deal with these refugees?

One answer was supplied by the Federation for Constitutional Government.The Federation was an outgrowth of the segregationist Citizen Councils and included such luminaries as U.S. Senators Herman Talmadge, James O. Eastland, and Strom Thurmond. Georgia Attorney General Eugene Cook and Representative John Bell Williams were also members. (You can find out more about this organization from its FBI file). In a pamphlet entitled, “Our Immigration System: A First Line of Defense,” they made their view clear: 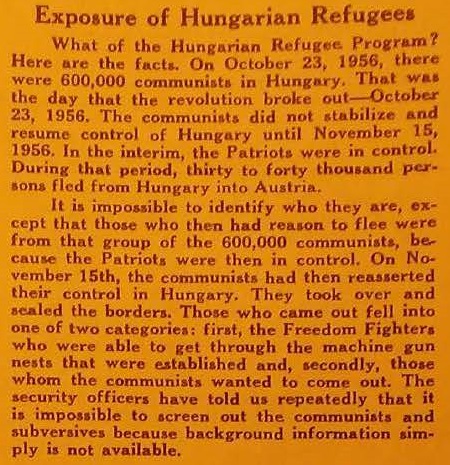 Then as now, the very conditions that caused the refugees to flee their homes is used as an excuse to exclude them: since we cannot tell who is Red we simply can’t risk having them in the country. Better to send them back to Hungary to face the totalitarian dictatorship that the right professed to despise than risk one of these refugees entering the country.

Vitézi Rend was founded in 1920 by Admiral Miklós Horthy, who was Regent of Hungary in the 1920s until 1944. Vitézi Rend was a patriotic organization meant to reestablish Hungary’s honor after it suffered huge losses of territory in World War I. Horthy was obsessed with Russian influence in Germany and his Arrow Cross Party (also on our list of subversive organizations) was nationalistic and antisemitic and those ideologies were reflected in the policies: its Numerus Clausus Act of 1920 was the first piece of antisemitic legislation of the 20th century.

When World War II broke out, Hungary was allied with Nazi Germany although it protected Jews from the Nazis to an extent. The Hungarian government had no problems taking vast amounts of Jewish property and creating brutal “labor battalions” of Jews, but it resisted the mass deportation of Jews to concentration camps. The motivations for Horthy’s actions in all this are complex, but one reason was that he was far from sure the Nazis were going to be victorious and he wanted to use the Jews as a bargaining chip with the West. By 1944, the Nazis had enough of Hungary’s recalcitrance and sent troops into Hungary.  Horthy remained in power and thus was in control as hundreds of thousands of Jews were sent to their deaths. This is why Horthy’s organization, the Vitézi Rend, was listed as an organization involved with Nazi collaboration and why members faced special scrutiny as possible subversives when entering the country.

Sebastian Gorka is a naturalized American citizen born in the U.K. of Hungarian parents and is a high-level “terrorism expert” in the Trump administration. He’s a close friend of Steve Bannon, a Breitbart regular, and a guy who apparently doesn’t realize you shouldn’t bring a handgun to an airport. He’s also a guy who is apparently a member of Vitézi Rend. The evidence for this is as follows:

The evidence is pretty clear, then. Gorka is a member of a racist organization that collaborated with the Nazis during World War II. Breitbart’s defenses of their former employee amount to little more than spittle-flecked cries of “Leftist media lies! Fake News” and aren’t worth reading. A more measured response can be found here from The Tablet, and it is worth examining that defense.

Gorka’s position of power in the White House is disturbing. Here’s an “expert” in “radical Islam” who does not read Arabic, has no significant publications on the topic, and other experts do not recognize as having any qualifications. His “plan” is a simplistic “kill them all” sort of idea. We know that Holocaust denial is on the rise  among far-right groups in Hungary, that Gorka’s mother worked with notorious Holocaust denier, David Irving, and that when Trump’s administration refused to recognize Jews as special victims of the Holocaust  Gorka himself called the critics of the refusal “asinine.” Finally, we know that Gorka’s defenses about his membership in the Vitézi Rend are fully consistent with it being a racist organization but inconsistent with honoring of his father. So, no he’s not a “Nazi” he is merely honoring a racist group to which he probably belongs.

The Muslim ban has Gorka’s fingerprints all over it. Lost in the bigotry of the Muslim ban is that it isn’t a ban at all. Rather it is a revamping of the vetting process. Trump plans to replace vetting with “extreme vetting” to keep us safe. No one seems to know what “extreme vetting” does (it sounds like “double-secret probation” to me) or how it is supposed to solve the problem of “there are no papers possible from the home country.” I guess, this comes down to how competent Trump is to vet people. As he’s fond of saying, we should just “believe” him. Sebastian Gorka’s presence in the White House is testimony to one of two things: Either the Trump administration has no idea of how to vet anyone or, worse, that it does and he was exactly what they were looking for.