I moved to Minnesota when I graduated college in nineteen-mumblemumble. Met my lovely wife there, got married there, had my first grownup job there, went to graduate school there, and I loved all of it. My godson lives there and my kids’ godmothers live there. We moved out in December 1993 but I’d move back there in an instant. The Twin Cities are awesome.

When I moved out, a quarter century ago, the Twin Cities was home to much more than Prairie Home Companion and lutefisk. By 1993, the Cities had already received several immigrant waves of Hmong from Vietnam and Laos, and Somali immigration was just beginning. Now there are tens of thousands of Somali immigrants in Minnesota.

The Alt-Right has been relatively quiet (as far as I can tell) about the Hmong. But the Somali terrify them. After all, these aren’t just Muslims, they are black Muslims! So scary! “This immigration must stop. Many of these devout Muslims do not assimilate. They agitate for jihad, and many return to Somalia…for training.” Another claims: “Somali gang members are loitering the area and committing crimes (autotheft, shootings, robberies, assaults, etc).” And, presumably because of their skin color, they cause rampant crime! This is just your typical racist nonsense except that it is typical racist nonsense trumpeted (get it?) by our President:

Here in Minnesota you have seen firsthand the problems caused with faulty refugee vetting, with large numbers of Somali refugees coming into your state, without your knowledge, without your support or approval.

He could have picked up this non-fact from any number of Alt-Right thinkers. An important point is that Somalis have entered the country legally, fully vetted, and through traditional channels. To recall a phrase: their papers are in order. Which leads many to think that the real goal of the Trump administration is to not merely stop “illegal” immigration, but to fundamentally alter who can legally immigrate into our country. The heart of the Alt-Right’s case is that the Somalis cannot “assimilate” into American culture. Whether because they are Muslim or because of biological differences, they are aliens in our midst and a danger to us.

Check out this Alt-Right scholar who posted just today (2 March 2017):

It is biology that makes today’s Scandinavian farmers in Minnesota closely resemble their Swedish and Norwegian ancestors despite 160 years of physical separation. Transporting Third Worlders to a First World setting would not substantially transform the new arrivals though these immigrants might relish the technological gadgets of their new home.

Or, as one writer on Richard Spencer’s site put it:

It is sheer folly, however, to imagine that seriously maladjusted people can be magically transformed by a ride down the road in a moving van. This is, of course, the same mentality that imagines that a native of Somalia can be metamorphosed into a blue-eyed Scandinavian by moving him to Minnesota.

Compare those quotations with this one:

There exists to-day a widespread and fatuous belief in the power of environment, as well as of education and opportunity to alter heredity, which arises from the dogma of the brotherhood of man, derived in turn from the loose thinkers of the French Revolution and their American mimics… Thus the view that the negro slave was an unfortunate cousin of the white man, deeply tanned by the tropic sun, and denied the blessings of Christianity and civilization, played no small part with the sentimentalists of the Civil War period, and it has taken us fifty years to learn that speaking English, wearing good clothes, and going to school and to church, does not transform a negro into a white man.

How far the Alt-right hasn’t come! The third quotation is from 1916. It was written by Madison Grant, America’s pioneering racist of the early twentieth century. Rich, powerful, friend of Presidents, amateur naturalist, wildlife conservationist, and, as distinguished anthropologist Jon Marks said of him, “A real fuck.” Like today’s Alt-Righters, Grant was concerned about the immigration of racial inferiors. Like these folks waiting at the famous Ellis Island:

The sharp-eyed reader will probably notice that these are all “white” people. So, what was Grant’s problem with them? Grant certainly thought that white people were better than black people, but white skin did not qualify someone as racially acceptable since “skull shape, eye color, hair color, and stature, are sufficient to enable us to differentiate clearly between the three main races of Europe.” In other words, Grant didn’t really believe in a “white race” since Europeans could be divided into Nordics, Alpines, and Mediterraneans. The blonde Nordic was the driver of civilization and founder of the country. The lesser European races were fine as laborers or underlings, but could never really become leaders or create great works of art. The immigrants that concerned Grant were from Southern and Eastern Europe, not his sort of people at all. So, while you and I see some nice Slovak women seeking entrance into the country, Grant would see racial inferiors threatening the racial purity of the country: 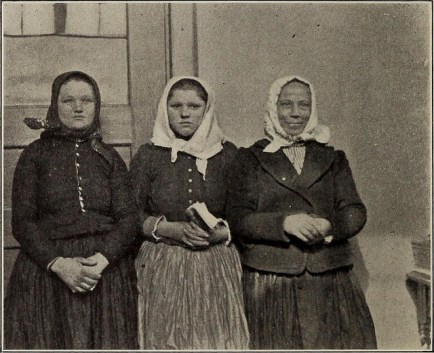 Grant’s fear that “The brunet Mediterranean element in the native American seems to be increasing at the expense of the blond Nordic element” lead him to champion immigration restriction. The 1924 Johnson-Reed Act established a quota system that shut off immigration from these racially inferior countries.The act was in place until 1965 when it was finally overturned.

The Alt-Right denies what every historian thinks, which is the 1924 act was racially motivated. People only think that because the “damn Jews” told them to. All of this would be of historical interest only, except that our new Attorney General, Jeff Sessions, is a big fan of the 1924 act and claims that the number of unassimilated immigrants “is about to surge far past what the situation was in 1924.” While concerns about “terrorism” are on the surface, underneath are plans to reshape the demographics of the country just as we did in 1924. The parallels are obvious and ominous. It is about immigrants who Steve Bannon and Steve Miller think cannot “assimilate” to the United States.

When Trump announced his disastrous Muslim ban, my own U.S. Representative, Rob Wittman, fully supported it because “if it saves the life of one innocent American, then it was worth it.” Wittman, and others following this calculation simply ignore that refugees are fleeing war, famine, and genocide. The 1924 Act meant that after Hitler’s rise to power, “the one country that might have provided a model of moral and ethical behavior in protecting Jewish refugees instead set an example for other potential countries of refuge to close their borders.” The Muslim ban sets a similar example and is a matter of life and death for many refugees. Condemning thousands to death and misery is apparently worth it if it “saves the life of one innocent American.” This is the way a racist talks.

When I tell people that I would love to move back to Minnesota, they sometimes react with horror: “It gets so cold there!” Yes, I reply, it does. The cold keeps the riff-raff out. Which is why the Somalis can live there peaceably. And why Jeff Sessions is from Alabama.

8 thoughts on “Jeff Sessions, Madison Grant, and the Gopher State”