I usually don’t talk about this because I want people to love me for who I am rather than the glamour of my past life, but I grew up in Fort Dodge, Iowa. Yes, the same Ford Dodge that was home to Karl King, famous composer of marches, considered the equal of John Philip Sousa. But, people ask, wasn’t he P.T. Barnum‘s favorite composer and didn’t he compose Barnum & Bailey’s Favorite March? Yes, I admit modestly, the very same Fort Dodge. Speaking of circuses, they often continue, wasn’t Fort Dodge where the gypsum was mined to create the famous hoax, the Cardiff Giant? Yes, indeed, I tell them. In fact, a highlight of the Fort Dodge Fort Museum is a replica of the very same giant. But Fort Dodge wasn’t all circus music and beloved fake giants. I loved Dolliver State Park, named after U.S. Senator John Prentiss Dolliver, a well-respected and formidable politician. Here’s downtown Fort Dodge in 1909, when Dolliver was making us all proud:

Unfortunately,those glorious days are gone. My childhood district is now represented by Representative Steve King, who says a lot of racist things. He tweeted: “Wilders understands that culture and demographics are our destiny. We can’t restore our civilization with somebody else’s babies.” King is referring to extreme rightwing Dutch politician Geert Wilders who fiercely opposes Muslims entering the Netherlands or the European Union. (Like Steve Bannon, Wilders can’t seem to decide if he wants to be a political leader or destroy the political order altogether). When King had an opportunity to sound a little less racist by explaining what he might have meant, he let us know that he meant every racist word: “I meant exactly what I said.” After all, “We can’t restore our civilization with somebody else’s babies.”

Our civilization. Someone else’s babies. Why would King divide the world into “us” and “them” in this way? And why can’t “their” babies grow up to be healthy and productive members of “our” society? King is worried that racial inferiors are outbreeding “us” and therefore our civilization will crumble. He denies it is about race, of course; rather it is about “our stock, our country, our culture, our civilization,” and that “we need to have enough babies to replace ourselves.” Tomato/Tahmahto.

King’s remarks are filled with a nostalgia for the good old days, when white folks were assured of their numerical dominance in “their” own country. He fears the day when whites are a minority in their own country, a day he warns is coming soon. Pat Buchanan argued the same thing in 2006 in his terrible book State of Emergency: How Illegal Immigration is Destroying America. That 2006 book was a rehash of his 2002 book The Death of the West: How Dying Populations and Immigrant Invasions Imperil our Country and Civilization. Both of Buchanan’s books warned of the same thing that American Enterprise Institute author Ben J. Wattenberg wrote about in 1987 in The Birth Dearth: What Happens When People in Free Countries Don’t Have Enough Babies? But the argument certainly didn’t begin with Wattenberg either. The template for this worry about racial stocks taking over was set, at least in the twentieth-century American context, by Lothrop Stoddard and his book, The Rising Tide of Color: The Threat Against White World Supremacy (1920): 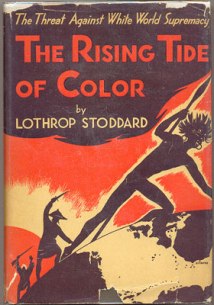 A Harvard-trained historian, Stoddard was good friends with Madison Grant, but unlike Grant, Stoddard concentated on color differences among the races rather than the differences among the European races. For Stoddard World War I was a “White Civil War” in which the racially superior slaughtered themselves leading to “frightful weakening of the white World during the war [and] opened up revolutionary, even cataclysmic, possibilities”(p. vi) for the brown and yellow races.

Such a situation would not last, however, given the demography of racial breeding:

Such is the ethnic make-up of that world of color which, as already seen, outnumbers the white world two to one. That is a formidable ratio, and its significance is heightened by the fact that this ratio seems destined to shift still further in favor of color. There can be no doubt that at present the colored races are increasing very much faster than the white. Treating the primary race-stocks as units, it would appear that whites tend to double in eighty years, yellows and browns in sixty years, blacks in forty years. The whites are thus the slowest breeders, and they will undoubtedly become slower still, since section after section of the white race is revealing that lowered birthrate… On the other hand, none of the colored races shows perceptible signs of declining birth-rate, all tending to breed up to the limits of available subsistence. (pp. 8-9)

That “we are all immigrants” was immaterial to Stoddard, because white people had every right to invade and take over the land from lesser races. Stoddard said what he thought: white supremacy is entirely justified and he’s a bit refreshing compared to the Alt-Right’s weasely denials of their own white supremacy: ” Thus all those newer regions of the white world won by the white expansion of the last four centuries are alike menaced by the colored migration peril; whether these regions be under-developed, under-populated frontier marches like Australia and British Columbia, or older and better-populated countries like the United States” (p. 259). King’s argument is hardly new: this “problem” of the coming demographic disaster has been predicted for a long, long time. We must wonder when this wave will actually crash on our shores.

A common Alt-Right tactic is to deny they are saying racist things—indeed, those pointing out that they sound like racists are the real racists! “When you start accentuating the differences, then you start ending up with people that are at each other’s throats,” claimed King. So to clarify:

An interesting question to ask is: why do King and his ilk (Yes! His ilk!) consider the changing demographics of the country to be a problem at all? If white folks become a minority in the U.S., why is that a problem? Are people of color treated badly or something? Is King afraid that a brown or black U.S. Representative will talk about him the way he talks about brown or black people? The answers to these questions reveal that at the Alt-Right is trying to deceive us, and is probably deceiving itself. Despite their claims that racism is a thing of the past the idea that their white skin would no longer grant them privilege terrifies them. Imagining they would be at the bottom of the hierarchy rather than the top is the nightmare that drives them to panic about the lack of white babies. Steve King is a frightened little boy afraid of imaginary monsters coming to take everything away from him.

8 thoughts on “White Babies Only?”